“Only + full infinitive” is a set construction. It points to a surprising or frustrating subsequent event. Sometimes it can be replaced by
the weaker “but + finite verb”.

Someone/Something is a gas

– the party would be a gas

At the drop of a hat

Anna was always ready to go fishing at the drop of a hat.

Hold your head up

– We lost again. We’re the worst team ever!
– Keep your head up, Alex. you still have the whole season.

2) It was the goalkeeper who saved the match for us.
2)

3) It wasn’t a bit surprised to hear that Karen had changed her job.
3)

5) John didn’t celebrate until he received the offer of promotion in writing.
5)

6)I don’t really like her, even though I admire her achievements
6)

Pride yourself on [sth]: be proud (ES: enorgullecerse de..)
Come as no surprise: To be completely unsurprising
Not until…
When a sentence begins with the phrase not until, the subject and auxiliary verb in the first clause, immediately after not until, are not inverted. However, in the second clause, the subject and auxiliary verb are inverted (“did he celebrate”).
Much as: although (ES: aunque)

1) Mrs. Scott prides herself on her cooking
2) If it hadn’t been fot the goalkeeper, we would have lost the match
3) It came as no surprise to me to hear thar Karen had changed her job
4) There’s no point in trying to get Tim to lend you his car but you won’t succeed
5) Not until John had received the offer of promotion did he celebrate
6) Much as I admire her achievements, I don’t really like her

Flashcards are a great way to learn vocab words because they force you to study actively. They naturally aid repetition, a key for study. Nobody remembers everything from the first try. Our brain takes up to 20% of the entire energy the human body consumes, so memory is naturally lazy.

We have created an app for android for working with flashcards. It is called “3 stacks”

If you don’t know the definition of a particular word, put it in a “Struggled” stack.

Pick up your “Struggled” stack. For words where you know the definition, place them in the second stack “Learning” stack” next to the “Know It” stack.

Repeat this process, placing the words in the stack you best consider.

Doing
Making
Getting
Having

The ability to weep is a uniquely human form of emotional response. Some sientists have suggested that human tears are (0) evidence of an aquantic past – but this does not seem very likely. We cry from the moment we enter this (1) , for a number of reasons. Helpless babies cry to (2) their parents that they are ill, hungry or uncomfortable. As the (3)  they will also cry just to attract parental attention and will often stop when they get it.
The idea that (4) a good cry can do you (5)  is a very old one and now it has scientific (6) since recent research into tears has shown that they (7)  a natural painkiller called enkaphalin. By (8) sorrow and pain this chemical helps you to feel better. Weeping can increase the quantities of enkaphalin you (9) .
Unfortunately, in our society we impose restrictions upon this naturally (10) activity. Because some people still regard it as a (11)  of weakness in men, boys in particular are adminished when they cry. This kind of repression can only increase stress, both emotionally and physically.
Tears of emotion also help the body (12) itself of toxic chemical (13) , for there is more protein in them than in tears resulting from cold winds or other irritants. Crying comforts, calms and can be very enjoyalbe – (14) the popularity of the highly emotional films which are commonly (15) ‘weepies’. It seems that people enjoy crying together almost as much as laughing together.

Persuade: to make someone do or believe something by giving them a good reason to do it or by talking to that person and making them believe it (ES: persuadir, dar a entender)
Having a good cry cand do you a good 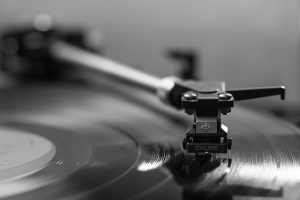 Sound like a broken record: to say the same thing over and over again (ES: te repites como un disco rayado)

“Oh, enough, Julie! You’re a broken record! I heard you the first time!”

Cutting Edge: advanced, the most modern stage of development in a particular type of work or activity (ES: avanzado, innovador, punta)

We bring you some cutting edge tutorials on DevOps, Design Patterns

Complete the sentences by using the following words.
Use each word once only..

1) It makes no to me how old he is.
2) He bought her flowers to make for being late
3) When he made a at her, she slapped his face.
4) Since he made a in property development, he’s been living a life of luxury.
5) Somebody’s made an on the Presiden’t life!
6) She made him an of £3 million for his business.
7) It really made her to see you all again.
8) The judge decided to make an of him and sentenced him to ten years’ imprisonment.
9) The only way you can make with them is by radio.
10) They made of the awkward way he walked.
11) On her salary she had difficulty making meet.
12) The minister made an about the new proposal.
13) Remember to use clean sheets when you make the
14) The boss made a of meeting every employee.
15) They made their to the stadium on foot.
16) Help! I can’t make of this exercise.

Make amends (ES: compensar)
Make a pass at sb: To make sexual advances on or propositions to one; to hit on one. (ES: insinuar)
To Slap : hit with open hand (ES: abofetear)
Make my day: To cause one to feel very happy. (ES: me alegró el día)
Awkward : Difficult to use, do, or deal with. Causing problems, worry, or embarrassment (ES: torpe, incómodo, embarazoso, difícil)
Make ends meet: to have enough money to buy what you need to live (ES: llegar a final de mes)
Make a point of +ing sth: insist on doing, say [sth] significant (ES: insistir)