Fill each of the numbered blanks with one suitble word: 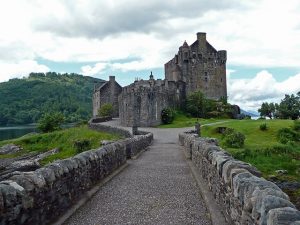 When the Stone of Destiny came back to Scotland, it was the culmination of a 700-year campaign to (1) it returned.
The Stone, which is little (2) than a lump of rock of no great commercial (3) or artistic merit, is of great (4) to the Scottish people, who, according to legend, could never be free while it was still (5) held on foreign soil.

It had originally being stolen by the English King Edward I in 1926. Prior (6) its repatriation, it was kept in Westminster Abbey in London, where it was used during coronations of English monarchs and on other ceremonial (7) but its absence from its (8) home was a continual (9) of grievance to the Scots.

The return of the Stone has once again raised the question of (10) should be done about other national treasures held in museums and private collections abroad. Sometimes the (11) under which an item was (12) make the decision simple; if it was stolen; it should go back. But more often that not the situation is far (13) straightforward. Artistic treasures may have been bought from colonial goverments who had no moral (14) to sell them, or donated by principalities and countries that no (15) exits.

There is also a moral problem here. The Getty museum, with its vast resources, could in all (16) buy the entire artistic heritage of Bangladesh quite legitimely, and (17) this would (18) most reasonable people being questionable. The (19) of every work of art being returned to its country of origin are remote, but nations should have right to house traseures of supreme cultural significance. As the return of the Stone of Destiny shows, this can be achive, but not (20) a struggle.

Anna’s story strikes me as an exaggeration.